This is a press release from the TUSC campaign:

On Sunday the campaign began for TUSC in Maltby, where Joe Robinson is standing in the North ward for Maltby Town Council. The ward was leafleted on Sunday, outlining who Joe is, his policies and some information about TUSC in Rotherham.

On Monday a stall was set up in the morning near Tesco, where leaflets were handed out to voters about the election, and also a petition on NHS cuts in Rotherham which was quite well received, pictured below. 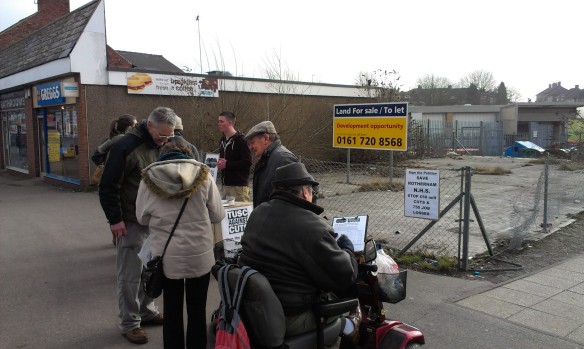 After the stall a larger portion of the ward was leafleted – many households in the ward should now have received a leaflet, with further campaigning planned at the weekend. Policies outlined include the saving of the bowling greens and tennis courts in Maltby and improving the conditions of parks and greenspaces in the town. Joe has given support to a community group aimed at a new play area for children around the New Estate. Greater transparency and accountability between MTC and the residents of Maltby is also called for and pledged in the leaflet.

The public seem to be quite pleased, being part of the campaign myself I’ve spoke to a few people who like what Joe is standing for and are glad there is a Labour alternative standing in Maltby. No sign of the other candidate, Jeanette Mallinder, yet – whether she’ll be campaigning or not is unknown, for now.

26 thoughts on “The TUSC campaign in Maltby is underway”