Skip to primary content
It was a fine spring morning Mr Lewis had awoken feeling quite chipper. As he ate his three shredded wheat he thought I think I will have a stroll in the sunshine to Dinnington. As he walked along his thoughts turned to the election, he wondered what useless campaigning Sir Nutkin would be up to today.
Within a few minutes he was in the high street and he spied a group of people gathered; being the curious person that he is he decided to investigate. Much to his surprise and delight he saw it was Sir Nutkin; who had with him the garden gnome and an entourage of not fit for purpose clowns. Mr Lewis, not being one for shirking his duty, approached them.
Good morning Sir Nutkin, last time we met you did not have time to answer my questions, Sir Nutkin being a seasoned member of the animal farm was heard to utter that under used political phrase, ” oh Shit”. Mr Lewis asked could you tell me what you did with the half a million pounds you squirrelled away.
Before Mr Lewis could ask his other question Sir Nutkin morphed into Mr Plod; move along there Mr Lewis. Of course Mr Lewis, with his usual fortitude, refused. Once again Sir Nutkin said I have a secret number and I am not afraid to use it. Then as if by magic Gone For A, AKa councillor Burton, appeared in front of Mr Lewis, so he moved to the left she followed, he moved to the right she followed, he stepped back she followed.
By now a crowed had gathered believing that a flash mob had turned up so they readied themselves for the street dance. At this juncture Gone For A became some what nonplussed she told Mr Lewis in no uncertain terms ” I will phone the police you are invading my space”. Mr Lewis carried on with the street dancing; until Sir Nutkin, tail bristling, ordered his minions back to the cars.
Once again this proves that for Sir Nutkin and the not fit for purpose clowns Dinnington is a no go area. But it also has to be said that Mr Lewis’s ambition to become a political prisoner has once again been thwarted.
Dave Smith
The T shirt in question modeled for us by Mr Lewis himself, to order one yourself, please contact Dave Smith. They are £10 each and available with a range of slogans, I particularly like, I would rather die on my feet than live on my knees. Proceeds to Dave Smith’s campaign funds: 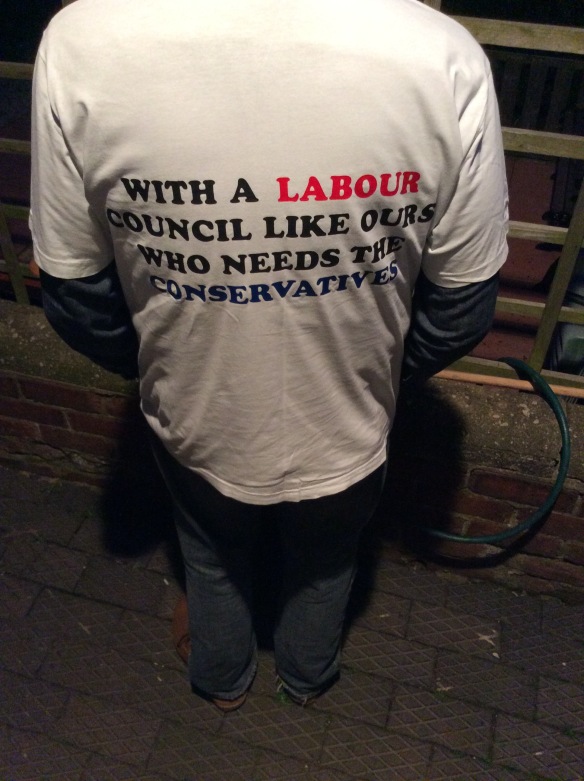