How did the Advertiser know the hearing was listed in time to print it?

As of Wednesday lunchtime, the usual deadline for articles in the Advertiser, the details of the hearing had not been released on the public court list.

In fact, no public listing of the case was made until Thursday morning, long after the Advertiser has usually gone to print.

Why was the Advertiser not there to hear the outcome?

We understand no damages were awarded at Friday’s hearing.

It also seems that the Advertiser has misunderstood what the judge said in April. The judge did not say that any comment made by Ms Collins was defamatory.

He held that two of the three comments complained about were opinion and the third, had been presented as fact and would need to be examined to see if it was defamatory.

In misrepresenting what the judge said it is possible that the Advertiser and those feeding it it’s lines are skirting close to defamation themselves. Bearing in mind that the wife of the Advertiser’s editor works for Sarah Champion there is no excuse for such inaccurate misrepresentation.

Perhaps the editor of the Advertiser should look up his protections under Reynolds?

The article in question: 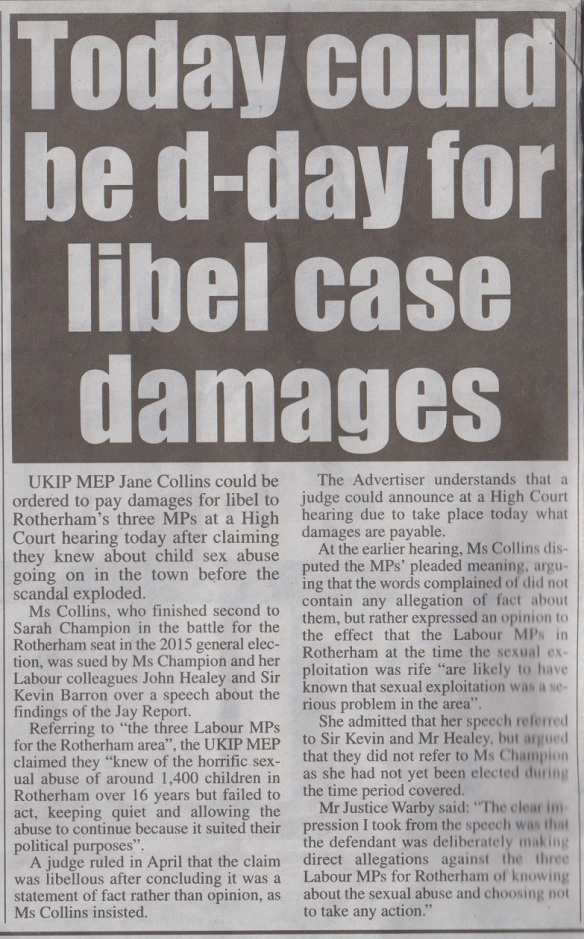 1 thought on “The questions that arise?”