NEO-NAZIS have sent a bomb threat to an Eastwood mosque, addressing the letter to “Muslim scum”.

The writer posted a note to the Jamia Masjid Abu Bakr on Russel Street, Eastwood on August 1.

It reads: “Next time it will be a bomb, you Muslim scum,” written in capital letters with a red ballpoint pen.

The sender signed off with Nazi numerals 14, code for the 14-word creed of white supremacists and 88, representing HH — short for Heil Hitler.

The incident was documented online by Islamophobia watchdog Tell MAMA.

A bomb threat received by a mosque in Rotherham was “credible”, according to police.

A letter reading: “Next time it will be a bomb, you Muslim scum,” was posted to the Jamia Masjid Abu Bakr mosque and was signed with a number code which is believed to be used by neo-Nazi groups.

Mr Hussein claims the Muslim community has felt “under siege” since the publication of the Jay Report into the sexual exploitation of teenage girls by men predominantly of Pakistani heritage. 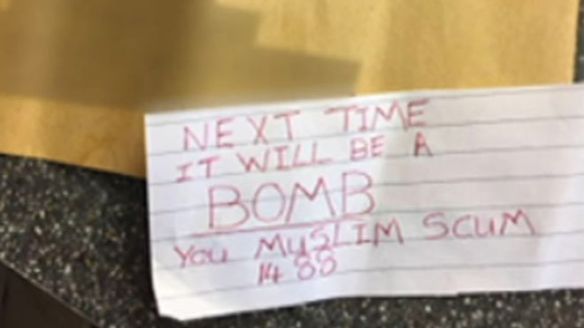