The Labour shadow minister Sarah Champion has distanced herself from a column in the Sun in which she wrote: “Britain has a problem with British Pakistani men raping and exploiting white girls.”

The shadow women and equalities minister, who is MP for Rotherham, said her piece had been altered and should “not have gone out in my name”. The newspaper said the MP’s team had fully approved the article.

Rotherham MP Sarah Champion has been accused of attempting to distance herself from a column she penned in The Sun on British Pakistani grooming gangs, after a number of Labour members called for her to be sacked as a shadow minister.

The Guardian reports that Ms Champion says her piece had been altered and ‘should not not have gone out in my name’. But a spokesperson for The Sun said Ms Champion’s team had approved the column before it went to print.

The column appeared last Friday, following the news that 18 members of a grooming gang in Newcastle were convicted of offences including rape, assault, supplying drugs and trafficking for prostitution. 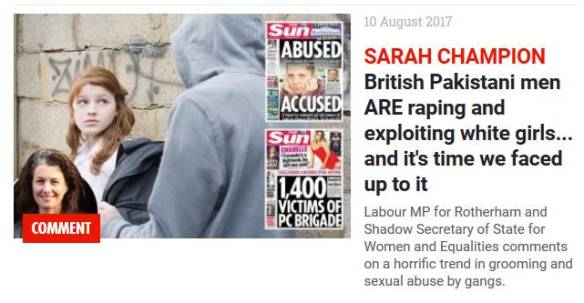