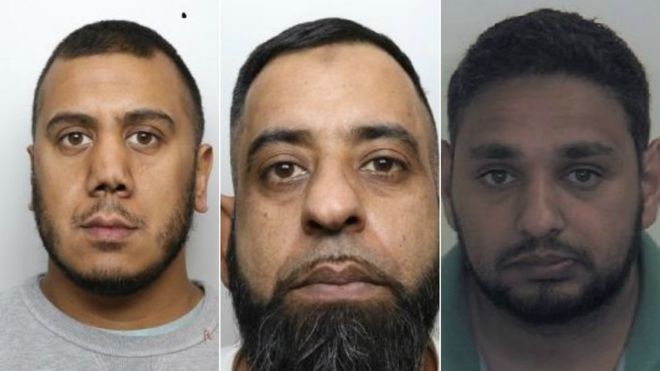 THREE men have been found guilty of 15 sex offences against a 13 year-old girl more than 20 years ago.

The men abused the victim, now aged 35, in a car park and graveyard in Masbrough after plying her with alcohol and pressurising her into performing sex acts on them.

A jury unanimously convicted three South Yorkshire men of 15 sex offences relating to the abuse of a 12-year-old girl at Sheffield Crown Court just a few moments ago.

It took the jury of six men and six women to find Sajid Ali, 38, Zaheer Iqbal, 40 and Riaz Makhmood, 39, guilty of a total of 15 counts of indecent assault carried out against a girl in the Masbrough area during the 1990s.

Judge David Dixon remanded the three men into custody until 2pm this afternoon, when they will be sentenced.

Opening the case last week, prosecutor, Sophie Drake, told jurors how the three defendants ‘plied’ their young victim with alcohol before pressurising her to perform sex acts on them, often one after the other.

Three men have been found guilty of sexually assaulting a teenage girl in the first trial to come out of the National Crime Agency’s investigation into historical abuse in Rotherham.

Sajid Ali, 38, Zaheer Iqbal, 40, and Riaz Makhmood, 39, were convicted by a jury at Sheffield Crown Court of a total of 15 counts of indecent assault.

The court heard the men had plied the girl with alcohol and encouraged her to perform sex acts on each of them.

The men will be sentenced later.