After almost a full 24 hours without an internet connection, I am beginning to have some sympathy with those caught up in this weeks Blackberry and Apple crumble. Connection thankfully re-established today! Hadn’t realised how dependent I have become on digital connectivity, definitely a bad week for technology!

Back to the main story; A year on from Denis MacShane’s disgrace being made public with the simultaneous announcement of the launch of a police investigation into his expenses claims and the suspension of the Parliamentary Labour Whip, the Standards and Privileges Committee, Parliament, Rotherham’s voters and the public generally are still awaiting the results.

October 14th 2010, seems so long ago since the Standards and Privileges Committee called in the Yard to bottom out what they themselves had uncovered lurking in his expenses claims, you would have thought it would have taken much less than a year to produce results? 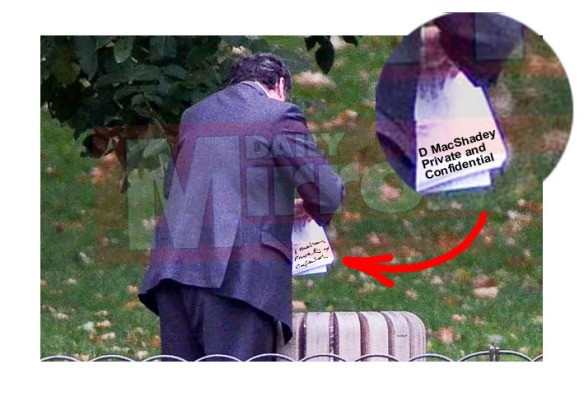 Picture pinched from the Mirror, Photo Shopped and sent to us by Mr T.

Yvette Cooper, shadow Home Secretary and her husband Ed Balls, shadow Chancellor, both Yorkshire MPs, are in further difficulty with their expenses claims. It has emerged that Andrew Bridgen, a Tory MP for North West Leicestershire, has written to John Lyon CB, the standards commissioner (AKA the sleaze buster, by some) complaining about the high number of claims made by the pair for family travel.

The ‘Green Book’ allows an MP to be reimbursed for 30 journeys per child, per year.

The couple claimed for 375 journeys taken by their three children between 2007 and 2010 between London and Yorkshire.

This adds further to the recent embarrassment for the Yorkshire & Humberside Regional Labour Party after Eric Illsley, Elliot Morley and Denis MacShane! One by-election victory in Barnsley does not repair the damage to their reputation.

They still have to face up to the fact that the expenses scandal is not going away any time soon and won’t, until the past is properly dealt with and the expenses fraudsters brought to book!

Why are Cooper and Balls of interest to us? Yvette Cooper, threw her hat in the ring in 1996, for selection as Wentworth’s replacement Member of Parliament for Peter Hardy. John Healey won comfortably, Yvette polled just 14 Votes from a then membership of 900 plus. Oh dear! I did warn her!

Her exceedingly poor performance in terms of votes was affected by an indiscretion at a Brampton Parish Hall Christmas do, a fortnight before the final selection meeting. Yvette’s  husband  to be, Ed Balls, put his foot in it when he was overheard to say, “This was his first visit to Yorkshire and he hoped it would be his last!” Not the best way to endear yourself to a bunch of Yorkshire folk wanting to find a suitable candidate to be their next MP!

The, much loathed by MPs, Independent Parliamentary Standards Authority (IPSA) has today updated their Website to include latest details of parliamentarians claims.

Citizens throughout the country will be able to see what has been going on. No small wonder then that MPs are still angry, perhaps they have realised that the ‘Spanish practises’ of yesteryear are over!

What exactly is wrong with demonstrating that you have actually expended the money before getting reimbursement, especially in the light of recent cases involving, David Chaytor, Eric Illsley, Lord Taylor and the ongoing case of Jim Devine, demonstrates in spades, why the new system was needed. Have they forgotten already? We haven’t!

We also remain convinced that there is still ‘unfinished business’ yet to be exposed and dealt with! Dealing with it properly is the only way to restore trust in politicians, not more cover ups!

Note ** Denis MacShane, Rotherham’s MP, now sitting as an Independent, was suspended from the Labour Party last October, when it was revealed that he had been referred to the Met Police for investigation for as yet undisclosed irregularities in his expenses claims. Previously it has been suggested that Laptop purchases and payments for translation services were said to be involved amongst other issues. News of progress of this little bit of ‘unfinished business’ is awaited shortly from the Metropolitan Police or Crown Prosecution Service (CPS). Denis is also a leading critic of IPSA, embarrassingly so at times! Start here for detailed previous coverage.

Labour MPs were selected and approved after Gordon Brown promised, that all Labour candidates had been thoroughly vetted, were honest and could be trusted in May. Only for Labour to be disown them soon afterwards when information, already known to the Labour Party, became public.

One rotten apple getting through may be considered unfortunate but two, both from South Yorkshire! We are left with the inevitable conclusion that Labour’s attempt at clearing out the rotten apples from amongst themselves did not work! At least not in the Yorkshire & Humberside Regional Labour Party! Red faces all round, from Director down I shouldn’t wonder! How can they have done such a poor job of weeding out those who should most certainly not have represented Labour in May 2010? Remember they already knew about Eric and Denis yet they still let them stand, Why? When their exposure was inevitable! It beggars belief!

We can also conclude, that there will be others yet to be exposed, in addition to Eric Illsley and Denis MacShane. We gather that those MPs with the most to fear, are those who habitually provided less than complete sets of receipts.

I can report to readers a breaking news story said to relate to Rotherham’s own greedy piggy of an MP, Denis MacShane.

After an investigation by the Metropolitan Police a file has been passed to the Crown Prosecution Service for their consideration.

This is the ninth file passed to the CPS. Of the other eight, six have resulted in prosecutions still going through the Courts system and two were not proceeded with.

This will now be considered by the special team, set up last year to consider political expenses cases, by Director of Public Prosecutions Keir Starmer and Metropolitan Police commissioner Sir Paul Stephenson.

Former Labour MPs David Chaytor, Elliot Morley and Jim Devine have been charged with theft by false accounting. earlier this year. David Chaytor now faces jail after he pleaded guilty to stealing more than £20,000 at the Old Bailey last Friday. He will be sentenced in the new year.

Eric Illsley, the sitting former Labour MP for Barnsley Central, now sitting as an Independent (as is MacShane), is currently suspended from the Parliamentary Labour Party and is awaiting trial and is accused of dishonestly claiming more than £20,000.

In March, Labour peer Lady Uddin was told she will not face prosecution over expenses for a flat in Kent which was apparently not occupied for long periods.

Lord Clarke of Hampstead is the second person to be told they will face no further action.

Who says Christmas only comes once a year! Celebrate!

Reading the Runes? or would that be Runiczny?

Democratic Outrage! Was there a ‘conspiracy of silence’ that concealed the full truth about ‘Dissembling’ Denis from the Voters of Rotherham?

The Courts are a bit like buses, nothing for a while then several come along at once!

The surprise move by David Chaytor to suddenly change his plea to guilty has a historical precedent!

Jonathan Aitken was faced with the same dilemma when he realised that to proceed with his defence would put his daughter at risk of prosecution for a number of criminal offences.

David Chaytor has taken the same way out as Aitken and many others have done before him. The crimes of his daughter, ought not to be expunged by the  father avoiding cross-examination by pleading guilty at the last minute.

Investigations should be completed into his daughters role in this and she should be brought to justice too if she was up to no good!

What will happen next with the cases of Labour’s Greedy Pigs, Elliot Morley, Jim Devine, Eric Illsley and the Tory greedy pig, Lord Hanningfield has yet to be established as they are still wriggling and squealing! Or for that matter, the current police investigation into Denis MacShane and others or the ongoing parliamentary investigations yet to complete. Plenty more to come!

The Supreme Court has today announced it’s ruling on the application by Former Bury North MP David Chaytor, 61, of Todmorden, West Yorkshire, ex-Scunthorpe MP Elliot Morley, 58, of Winterton, North Lincolnshire and Jim Devine, 57, of Bathgate, West Lothian, formerly MP for Livingston, That the expenses system was part of the proceedings of parliament and therefore covered by parliamentary privilege.

Piggies, thanks to Guido Fawkes.

The Court has ruled that parliamentary privilege does not apply in these cases and have removed the last legal obstacle to their Crown Court trials.

The three are on unconditional bail and due to face separate trials to take place at Southwark Crown Court. Chaytor, Devine and Morley deny these charges.

Elliot Morley’s trial is due to commence on November 22, 2010. At Southwark Crown Court.

Elliot Morley is accused of ‘falsely claiming a furnishing allowance’ after claiming more than £30,000 expenses for a mortgage he had already paid.

A second charge alleges that between April 2004 and February 2006 Morley made a further false mortgage interest claim.

David Chaytor’s, trial is due to commence on December 6, 2010. At Southwark Crown Court.

The first charge alleges that, in May 2006, he dishonestly claimed £1,950 for IT services by using false invoices.

The second charge alleges that, between September 2005 and September 2006, he dishonestly claimed £12,925, for renting a property in Regency Street, London, when he was in fact the owner of the property.

The third charge alleges that, between September 2007 and January 2008, the MP dishonestly claimed £5,425 for renting a property in Bury from his mother.

Jim Devine’s trial is due to commence on , 2 February 2011. At Southwark Crown Court.

Jim Devine is accused of falsely claiming expenses in March 2009 after submitting two misleading invoices for printing services worth £5,505.

Also charged with dishonestly claiming allowances for repair, insurance or security between July 2008 and May 2009 by submitting false invoices for services, cleaning and maintenance of £3,240.

I repeat the above statement, that all three involved deny the charges.

This raises questions as to whether there are similar reporting restrictions being used in the other cases of Labour’s unfinished dirty business. Eric Illsley,  has started the judicial process and Denis MacShane has been referred to the police for investigation. There has been a dearth of information coming out into the public realm at the moment, I wonder why?