JOTTINGS FROM “A QUALITY PARISH COUNCIL!!”

Tell the children that the pantomime season is now well and truly over.

Our theatrical performers have now moved into a new genre. THE FARCE.

THE FARCE – which is – Anston Parish Council

Question: Why did Cllr.Liz O’Brian do a cover up job for Iain St.John?
Answer: Maybe she practising to be a magician!

Question: Did she blush beetroot red whilst telling her very elaborate story – That Iain St.John did leave the room after he declared “An Interest!?”
Answer: YES – BRIGHT RED

Question: Did she turn round 180 degrees to see him leave the room?
Answer: NO: she had her back to the door.

Question: Did Iain St.John leave the room?
Answer: NO NO NO – Members of the public emphatically state – He walked over and stood looking at the map which is by the door but in the meeting room.

Lying, covering up, dissembling? – All part of the tatty tapestry that is Anston Parish Council.

TOO MUCH INTEREST Councillor Joyce Brindley

Question: When did it become acceptable for a parish councillor to comment, in a meeting, about the private life of a member of the public, who was present?
Answer: Never – Cllr Joyce Brindley’s behaviour has in the past, been less than professional and she continues her spleen venting, this time on a member of the public.

Question: Should Cllr Joyce Brindley avail herself of some standards?
Answer: Yes she should – and that goes for the majority of this less than trustworthy lot.

She has been buying into false information – She should ask for a refund!

Question: Did a member of the public ask when the track on the south side was going to be repaired?
Answer: Yes

Queston: Did The Clerk, say it had been repaired?
Answer: Yes he did

Question: Was this contested?
Answer: Vehemently

Question: Did Anston Parish Council allow this track to be deliberately damaged & destroyed?
Answer: Oh yes, despite being advised, repeatedly.

Question: In the past did Robin Stonebridge say that he personally would not do any repairs on the village green until hell froze over?
Answer: Absolutely he did – discrimination again.

Question: Has not the Clerk, said in the past, the council have no obligation to repair this track?
Answer: Oh yes he has.

Question: Does Anston Parish Council have a duty to protect & maintain the Village Green which is vested in them?
Answer: Most certainly they do

Question: Then why did they allow a resident of Anston Village Green to systematically destroy the area?
Answer: Good question.

Watch this space good people and learn much more. 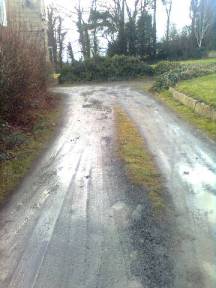 This is Anston Parish Council’s repair!

Scramble to the bar. We need a drink to fortify ourselves for what is to come.

Lights down, Curtain up.

Question: Did The Clerk say the Green had been litter picked that day?
Answer: Yes he did

Question: Then why is there still a substantial amount of litter on the perimeter that has been there for a very long time?
Answer: Because we are waiting for the wind of change! This then will blow it away!

Question: Did Chairman John Ireland say to the effect “There’s more to Anston than the Village Green. Would that be the Loyal Trooper public house by any chance?
Answer: Make up your own mind audience.

Question: Who is this young person trying to impress by booming out unimpressively loudly and aggressively?
Answer: Probably Iain St.John, It does appear he has donned his mantle, shame it’s not the cloak of invisibility.

Question: Does this boy not realise he is emulating Yesterday’s Men?
Answer: Does not care?

Question: Is it appropriate for Booming Beck and Judy Dalton (Vice Chair) to sit sniggering in a pathetic congratulatory way when Booming Beck has delivered one of his tirades?
Answer: NO – but then who cares about decorum – it is Anston Parish Council!

Question: What on earth or moreover what planet, any planet, is he on?
Answer: Who knows – the only hope for Anston is that he will be sucked into a black hole!

Questions: Did he remain in his seat as Chair during a complaint against him?
Did a member of the public point out his error?
Did the Chairman refuse to take note of correct procedure?
Did he fail to ask for a seconder before evicting Cllr Thornton?
Did he say he didn’t need to?
Did he then realise he should have done so?
Did he then say he already had – and it was Joyce Brindley!!!?
Did he then over look Joyce Brindley “co-operating” with Iain St.John to say she had?
Did he then………………

Oh well – you get the picture

Question: Who had planned the ambush?
Answer: Surely not Iain St.John!

Question: Did Joyce Brindley just happen to have her Standing Orders before her and open at Section 50?
Answer: Oh yes – You bet she did

And why – Because Cllr.Thornton was, yet again, pointing out the errors under which Anston Parish Council was operating.

To quote Corporal Jones – “They don’t like it up em sir.” Should that be cur?

Voting to evict Cllr.Thornton from the meeting.

Question: Did Iain St.John turn in his chair to face Cllr Thornton as he was leaving?
Answer: Yes

Question: Was he grinning and gloating?
Answer: As a child might after a playground spat.

Question: Did Cllr St.John then become very full of himself and start showing off in the meeting?
Answer: Well what do you think

Question: Do we need to know he has been out on his bike?
Answer: Don’t give a twopenny toss – Not relevant to the meeting, like so much of what comes out of his mouth.

(Fado would have had endless material from this lot of “under” performers!)

HOW VERSATILE THIS LOT ARE! Now from Farce to Tragedy

That Anston has this majority of under performers, playing to and for benefit of The Master Puppeteer.

Question: Has Chairman Ireland admitted to being Ian St.John’s puppet?
Answer: Oh yes, on a number of occasions.

Well we will see how Anston Parish Council is themed at it’s next performance. Come, come and see, if you can stand it. Why should we suffer alone? A good night out! Entrance free.

Lights up – curtain down – NO THUNDEROUS APPLAUSE AND PLEEEEZE NO ENCORE

Supporting Cast:
Mr D Smith and his Professional Heckler Mr Brian Lewis – Dave Smith did not speak.
Bill Brindley husband of Joyce Brindley. At odds/verbally aggressive/confrontational with Brian Lewis.
The Chairman allowed Bill Brindley to speak at will, despite not being a parish councillor, his status at the meeting was that of a member of the public. He certainly should not have had a go at Stuart Thornton.
The Chairman – Ireland, as you might expect, did bugger all about it!

Representatives of The Brethren were there!! But did not speak!