Stuart Thornton gets a response to his Freedom of Information request and makes the following observations. It seem as though Dazza gets the Town hall for free to run the interviews for the Labour Party selection process. Dazza is not … Continue reading →

Today’s snail mail brought this evidence of change on the horizon, coupled with naked ambition?

Or – Daz tries for a seat on the gravy train! Any seat will do! Rotherham Politics brings news of our Daz trying his best to con Yorkshire & Humberside Labour Party members that, he is not still a Tory … Continue reading →

Daz Hughes, the Champagne socialist and kiss of death to many an election campaign, even his own! Rothpol’s intelligence indicates that this by-election is getting desperately close! There are rumours that Nigel Farage may be putting in an appearance to support their candidate, watch this space!

When your troops are as numerous as this, not much door-knocking is going to take place!

Polling day in the Rawmarsh by-election, is 16th May, Thursday week!

There is still all to play for, with ten days of campaigning to go!

Private Eye’s Rotten Boroughs column features our old friend Darren Jason Louis Hughes, no less. Private Eye edition 1339 should be on sale now, do yourself a favour get yourself a copy still only £1:50, there is much more than this, to make your purchase worthwhile! 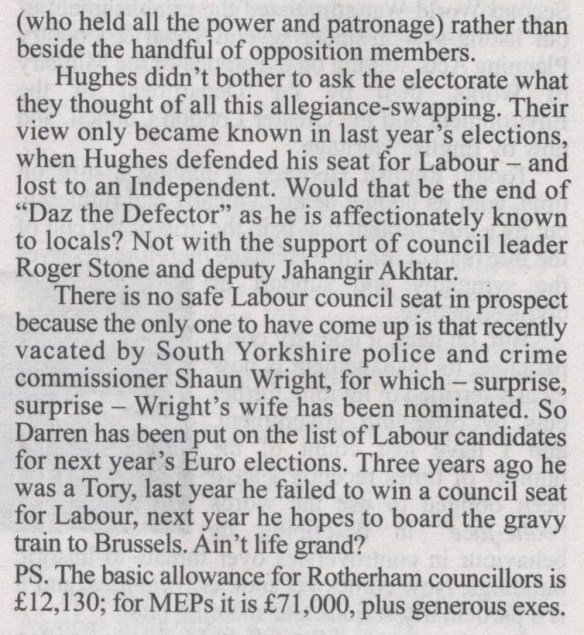 Many apologies to Private Eye.

Private Eye’s Rotten Boroughs column features our old friend Darren Jason Louis Hughes, no less. Private Eye edition 1339 should be on sale now, do yourself a favour get yourself a copy still only £1:50!:

Before the nomenclatura get carried away, two of them are mentioned too! Come back later for more.

A wag has suggested a new name for Daz.com, greedytosseronthemake.com, perhaps?

Tracey Simpson-Laing, Deputy Leader of the City of York Council and current UK Local Government representative to Europe, seems to have stolen a march on her opponents with her web offering and the impressive group of supporters. Looks like it may already be over for Daz’s European Ambitions?

Amongst her many endorsers can be found:

Looks like it’s all over bar the shouting with this bunch supporting Tracey. Roger Stone’s support for Tracey must be especially galling for Daz?

Shortlisted MEP Candidate for Yorkshire and the Humber Region. Labour/Coop Party. Chairman of Shield HIV and Rush House Ltd. All tweets in a personal capacity

From Tales from The Town Hall:

Darren Hughes – One To Watch

Don’t take your eye off Darren Hughes. Look away for just a brief moment and all could have changed. This is the Conservative who was elected to Rotherham Council by supporters in the Anston and Wooodsetts ward in 2008, became leader of the Conservative group on the council, and then quit the Tory Party two years later. Read on…

The vacancy for the Rawmarsh Ward has now been declared:

Two electors needed to ensure an election, get to it!

LOCAL GOVERNMENT ACT 1972
ROTHERHAM METROPOLITAN BOROUGH COUNCIL
CASUAL VACANCY IN THE OFFICE OF COUNCILLOR
NOTICE IS HEREBY GIVEN under Section 87(2) of the Local Government Act 1972 that a casual vacancy exists in the office of Borough Councillor for the RAWMARSH WARD of the borough of Rotherham.
An election to fill the vacancy will be held if notice in writing of a request for an election is given to Mrs J Collins, Director of Legal and Democratic Services, Rotherham Metropolitan Borough Council, Riverside House, Main
Street, Rotherham S60 1AE by two registered electors.
If no such request is received, the vacancy will be filled at the next ordinary elections in May 2014.
Martin Kimber
Chief Executive
3 April 2013