Towns like Rotherham, have numerous charities, local groups and clubs that invite on to their controlling boards, people who lend their reputations to these organisations. Rotherham seems to have far more, than it’s fair share of these charities and related … Continue reading →

One from the Advertiser that strangely, was there one evening and then disappeared from their website the following morning, why? perhaps we should be told! .

Guido, first with the news, as usual. Lord Ahmed Resigns From Labour Party Race Row Resignation Letter in Full Dear Mr Wilson (National Constitution Committee of the Labour Party Secretary) I have been considering my position over the weekend and have … Continue reading →

In that same week, before the Tizer’s story deadline, Ahmed admitted to The Huffington Post that he had made the comments ascribed to him in a media broadcast in Pakistan. Many thought these comments to be racist.

The Tizer did not cover this confession and apology.

I feel that the Advertiser too often lets the people of Rotherham down by failings in it’s journalistic standards. I do not blame the Tizer for not printing my letter, maybe it was too long? However shame on them for acting as his apologist which maybe acted to cover his potentially racist behaviour and apology.

Here is the letter I submitted:

“Response to The letters section Lord Ahmed’s Solicitor and friend have been given a far larger than average amount of space to defend his actions.

“I was always taught that letters to the Ed should be short, sharp, punchy and topical. Not long, ramblings by someones solicitor and a friend; ramblings that simply rehash old news.

We already know that Ahmed was not responsible for the death of the motorist. That his texting while driving at speeds up to 70 miles per hour on a rainy motorway was stupid, dangerous and illegal; but not a causal factor in the death. There it is said in two sentences.

These ramblings seem in your editors mind to outweigh the hot news, that in an interview to an internationally renowned news journal Ahmed “completely and unreservedly” apologised to “the Jewish community, to the judiciary, to the newspaper owners” for blaming Jewish-owned media organisations for his imprisonment for dangerous driving.”

His original words, spoken in Urdu to  Pakistani media being perceived by some as a racist attack on the Jewish people, and possibly what lead to his recent removal as an ” International Expert “with the  Institute For The Research of Genocide – Canada.

Is it a coincidence that his solicitor and a friend write such lengthy letters in the week when he has admitted to very poor judgement and an attempt to blame others for his actions? Could it be a  smokescreen?

Your newspaper has a responsibility to investigate and report the truth, or if feeling lazy at least read other newspapers. This was a bit shabby.”

Rik, I am not a racist, indeed I think myself quite the opposite. What I really hate is politicians who play two faced games with their own communities. I am concerned about the quality of representation we get in Rotherham, regardless of race, religion, sexual orientation etc. 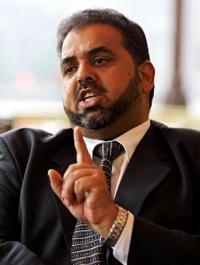 No sign of the Jewish conspiracy here. Despite the obvious provocation, the JC is remarkably reserved in it’s criticism.

Caught exercising his “habit of telling a British non-Muslim audience one thing in one language and a Pakistani Muslim audience something else in another.” Ahmed has just gone too far this time, the Labour Party and Ed Miliband surely cannot allow any return to the Labour fold.

“Labour peer Lord Ahmed quits interfaith role,” Sacked from Interfaith Role, would have been more accurate! The JC did give him an easy ride after all. Info from comment.

Ahmed apologises ‘unreservedly’ for his anti-Semitic comments. Great: now Labour can kick him out

Apparently, Lord Ahmed has just apologised for his remarks about the Jewish community. In an interview with Mehdi Hasan in the Huffington Post, he says he “completely and unreservedly” apologises to “the Jewish community, to the judiciary, to the newspaper owners” for blaming Jewish-owned media organisations for his imprisonment for dangerous driving in 2009.

A bit more obliquely, he claims “he has “the greatest respect” for the Jewish community and could not “believe [the video] when I saw it”. He said his comments were “completely wrong”, “unacceptable” and the product of a “twisted mind” – but took “full responsibility” for them. Seeing the comments were his, it’s hard to see who else could be responsible. As for the “twisted mind”, well, you said it, m’lord. Read on……………….

From the Yorkshire Post: Peer says sorry for his ‘Jewish conspiracy’ claim

Previously from the Advertiser: Rotherham peer suspended over new controversy

Very grateful to a regular reader for this information from the Times newspaper and researched and written by Andrew Norfolk, the award winning, Chief Investigative Reporter, no less! 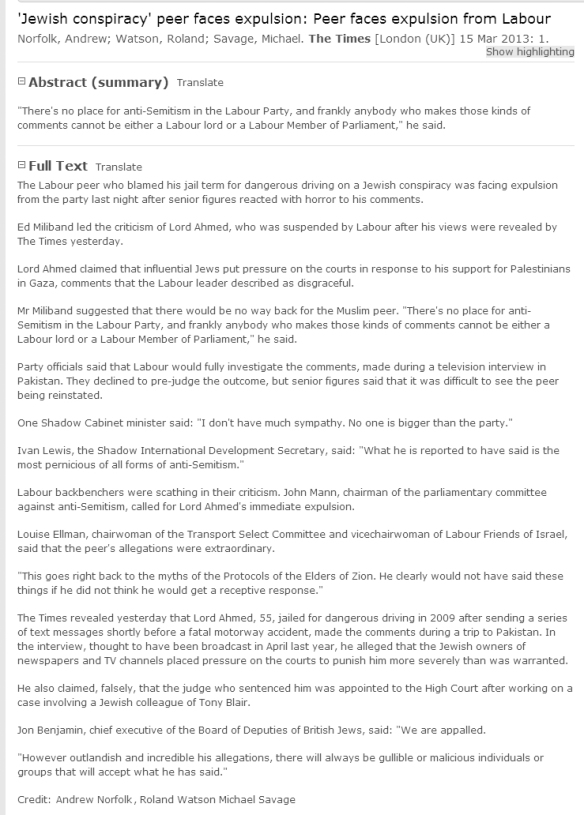 Featuring Lord Ahmed and some of his pretty outrageous views. On this occasion spoken by himself and broadcast on television, last year in Pakistan.

Rothpol would be very grateful for some scans from the Times, Wednesday and Thursdays editions, so that anyone who missed them can read the sorry tale for themselves, if any reader could oblige?

Meanwhile, as a warm up, I thought readers might like to review these links to stories that made it into the local and national press and media last week:

The Star: Peer suspended by Labour

The Independent: ‘There’s no place for anti-Semitism in the Labour party’: Ed Miliband condemns Lord Ahmed over claims he blamed imprisonment on ‘Jewish conspiracy’

At Rotherham Politics, we are left scratching our heads at the activities of Lord Ahmed and his apparently limitless ability to cause such offence. We are also continually baffled and dismayed at the failure of the Labour Party to adequately deal with him!

This time, there must be no way back for this deeply flawed individual.

Oh, the answer to my question?

Not by a long chalk! Especially if the labour party continues to stick their heads in the sand and ignore Rotherham’s central problem that Naz Ahmed, Jahangir Akhtar and Mahroof Hussain exemplify!

Barnardo’s, the children’s charity, have released their report on child sexual exploitation:

Puppet on a string,

pdf file, should open in your browser, you can save a copy too. To return, use your browsers back button.

This report should be widely read and it’s lessons, heeded.

I just came across this most interesting item relating to the amazing John Wesley on 6 October 1774 and thought just how topical this is in the context of the forthcoming PCC elections. His items of advice are thus –

1. To vote, without fee or reward, for the person they judged most worthy.

2. To speak no evil of the person they voted against.

3. To take care their spirits were not sharpened against those that voted on the other side.

And then I thought to myself, I wonder just how many of the RMBC Corn Fed Grunters, Muppets and Clowns could honestly say that when they voted for Shaun Da Sheep as Rovrum Laybah candidate for South Yorkshire Police & Crime Commissioner that they honestly judged him as the most worthy?

I certainly know from my THT Agents “Garbo” and “ZigZag” that the Corn Fed Grunters, Muppets and Clowns regularly bad-mouth Da Sheep behind his woolly back, so he’s failed on point 2 as well.

Ah well, we’ll get our chance to decide soon, and then active and empowered citizens can sit back and enjoy scrutinising whoever manages to scrape the bottom of the barrel with their votes.