They say diamonds are a girl’s best friend and for the Mayor of Rotherham this is certainly true, as a special donation signs her time off with a sparkle. A flawless diamond worth over £2,000 was gifted to Cllr Lyndsay … Continue reading →

I’m not the kind of dude that’s often lost for words, but I have to admit that the story at the top of Page 30 in the ‘Tiser (Jan 27th) did manage to silence me for a minute or two. … Continue reading →

ROTHERHAM’S new mayor will be sworn in at a full council meeting this afternoon. Cllr Lyndsay Pitchley will take the chains of office from outgoing mayor Cllr Maggi Clark Read on… http://www.rotherhamadvertiser.co.uk/news/103150/rotherham-s-new-mayor-to-take-chains-of-office.aspx

Impatient drivers to be curbed by new bollards BOLLARDS will be installed at a junction where impatient motorists have been mounting the kerb to avoid queueing in traffic. Aston-cum-Aughton Parish Council has teamed up with Rotherham Borough Council to install … Continue reading →

There are 63 seats to be contested in Rotherham’s 2016 Council elections….3 councillors for each of the 21 Wards. Sadly, well maybe not so sadly, none of the political parties can at present find sufficient candidates to contest every seat. … Continue reading →

Nothing quite exemplifies the scale of Labour’s problems in Rotherham, than the list of Labour councillors, whose term of office expires next May. There are some real incompetents, deadbeats and worse, among this bunch. They are also all signed up … Continue reading →

Holderness Labour’s candidates, on whose behalf the notorious leaflet was distributed. 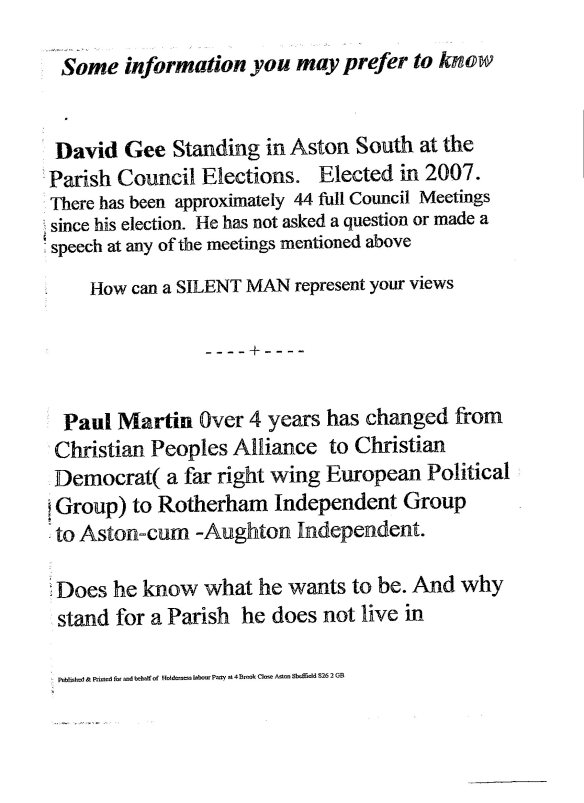 Those with sharp eyes, will have noted that the official Labour Leaflet states, ‘Published by G.Smith 4 Brook Close Aston Sheffield S26 2GB Printed by J S Blencowe’. The same address, minus the name G Smith, appears on the ‘offensive’ leaflet which is both misleading and untrue in most respects!

Whose address is this? I can reveal it is the residential address of one of Rotherham’s most disagreeable politicians, Borough Councillor and at least until tomorrow, Aston-cum-Aughton Parish Councillor – Gerald Smith !